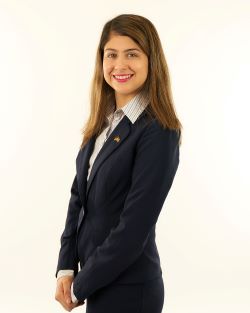 When she arrived at Harper College, Maria Vital already knew how to speak English and Spanish after a childhood of traveling between Mexico and the Northwest suburbs. And she had taken French classes at Palatine High School.

But it was a fourth language that Vital learned at Harper that helped her win a coveted cultural immersion fellowship. She’ll soon travel to Germany for a year for intensive language training, a semester of classes and an internship in the field of her choice.

Vital is one of only 75 American young professionals selected for the yearlong Congress-Bundestag Youth Exchange Program for Young Professionals, a program that rarely selects winners who don’t already have bachelor’s degrees.

“I find the complexity and the beauty of the German language incredibly appealing, and their way of thinking and living is a nice change when contrasted to what I’m familiar with,” Vital said. “Pursuing my college education and being selected for this fellowship are opening up a whole new world that I can’t wait to explore further.”

A first-generation American college student from Palatine, Vital earned her associate degree from Harper in December 2017 and has been taking additional German classes in the meantime.

Kimberly Jaeger, associate German professor, described Vital as a goal-oriented student who knows when to assert herself and when to listen and learn.

“I don’t nominate people every year,” Jaeger said. “I always wait for someone who I think would be especially capable. Maria seeks out every opportunity to engage with other cultures.”

Vital, 23, will be the first-ever Harper student to complete the fellowship. From there, she plans to pursue a bachelor’s degree. Vital had been looking at a business career, but recently she’s taken an interest in computer science and is tempted to tackle a very different category of language: programming languages.

The Congress-Bundestag fellowship is just the latest symbol of her passion for learning about other cultures.

Vital started learning German after getting to know exchange students studying at Harper. Later, she worked as an intern with Barrington Bank and Trust and noticed many customers speaking the language. Learning German has both helped her meet people at the college and opened more opportunities for her, her fellowship being the latest.

The fellowship won’t be her first time overseas. Last year, she studied abroad in Salzburg, Austria, through Harper.

“I understood from a small age that there is a bigger world,” Vital said. “I saw that, by understanding other cultures and languages, I was able to look at the world from a different perspective, and I was eager to see how my passion and experiences around world languages could translate to a career.”