Skip to content
Registration begins this week for Fall Semester courses
Check out InZone, offering virtual learning for kids through June
Learn about the new Online Associate in Arts degree. 100% online. 100% transfer.
Watch graduation videos and give a shout out to the Class of 2020
Get the latest updates on Harper's response to the COVID-19 outbreak.
https://www.harpercollege.edu/stories/images/Lavleen%20Mal.jpg 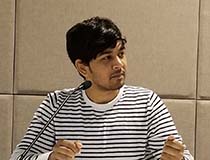 Civic engagement runs deep in Student Trustee, Lavleen Mal’s family. His grandmother was the mayor of their village when he was a child and his father is a politician in India. “Politicians get to solve problems,” says Lavleen. Given the example set in his family, it’s no surprise Lavleen decided to run for Student Trustee at Harper.

As Student Trustee, Lavleen has the responsibility of representing the student perspective with the Harper College Board of Trustees. He participates in board meetings, on committees and meets with students across campus.

In his role, he has traveled to New York for a legislative summit, Cambridge University and Washington D.C. to represent Harper College with our federal lawmakers. He has been very involved in the selection of Harper’s next president and he has brought light to issues on campus.

Lavleen is proud to be working with the Board of Trustees and Harper College Police to create a safer driving environment. He is also working to improve recognition of our Smoke-Free Campus.

“Your voice matters,” says Lavleen. To let him know what you think or for questions about the responsibilities of Student Trustee, email Lavleen.