For Dr. Alexander Kantorovich, success means making a difference in all aspects of medicine. This mindset was cultivated and began to flourish during his time at Harper College. 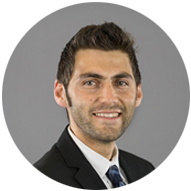 Dr. Kantorovich arrived at Harper in 2006 under the Distinguished Trustee Scholarship, with a goal of attending pharmacy school afterwards. While a student at Harper, he had the opportunity to work on an independent research project under the direction of his organic chemistry professor, Dr. Daniel Stanford.

Dr. Kantorovich has achieved an exceptional level of success in the pharmacy profession. He previously served as Clinical Associate Professor of Pharmacy Practice at Chicago State University (CSU) College of Pharmacy and Clinical Pharmacy Specialist at Advocate Christ Medical Center. In just three years at CSU, he ascended the faculty ranks and was granted the rank of Associate Professor in July 2017.Currently, Dr. Kantorovich is a Cardiopulmonary Medical Science Liaison at United Therapeutics focusing on pulmonary hypertension.

In addition, Dr. Kantorovich has made significant contributions to his profession in the form of scientific research and writing. He has been a contributing author on pharmacy-related book chapters, and has published in numerous medical and pharmacy professional journals.

Dr. Kantorovich’s volunteer and community activities include giving back to his profession through reviewing professional manuscripts and student CVs, as well as editing board certification materials. He has also served as a judge for the Chicago Public Schools science fair and in providing important health screenings to disadvantaged patients.

Dr. Kantorovich considers attending Harper College one of the best decisions he has ever made. He received the Harper College Distinguished Alumni Award in 2017.