Kathleen N. Graber was always a champion of education. Her pharmacist father refused to pay for her dream of a journalism degree — but would send her to pharmacy school. She chose an education over her dream. While working as a hospital pharmacist, she met my father, married him and raised five children who all earned college degrees. 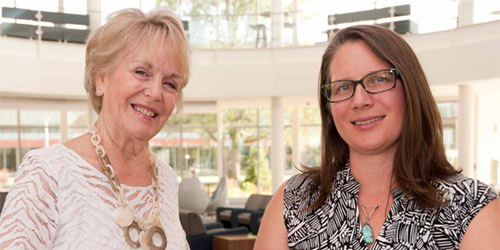 She also boarded three college students so they could afford to go to school and supported many other students with anonymous scholarships. After her children were gone, she went back to her dream of journalism and published five books on genealogy and wrote numerous magazine articles. She would love the idea of the Kathleen N. Graber Scholarship, helping others to realize their dreams.

After college, I worked as a school speech therapist for seven years. When I had children, I went back to school to get my master’s degree in guidance and counseling.

When it came time to choose a practicum site, I chose Harper because I strongly believed in its mission and because it was close to my home and small children. I worked hard to be the best intern I could be, hoping Harper would hire me. I did get a job as a part-time counselor. Because of the support and mentoring of many Harper staff, faculty and administrators, I served in many different positions, ending my career as the Dean of the Student Development Division, 22 years later. I was privileged to have a very fulfilling career that allowed me to keep learning while helping others.

I hope that the recipients of this scholarship will use the support to pursue the education needed to succeed in a fulfilling career. I also hope they will find a way to keep on learning throughout their entire life.

“I greatly appreciate the opportunity this scholarship has provided to work hard and achieve a fresh start for me and my son.”
—Leslie Walter, 2019-20 Scholarship Recipient

Reprinted from the 2020 Realizing Dreams program.