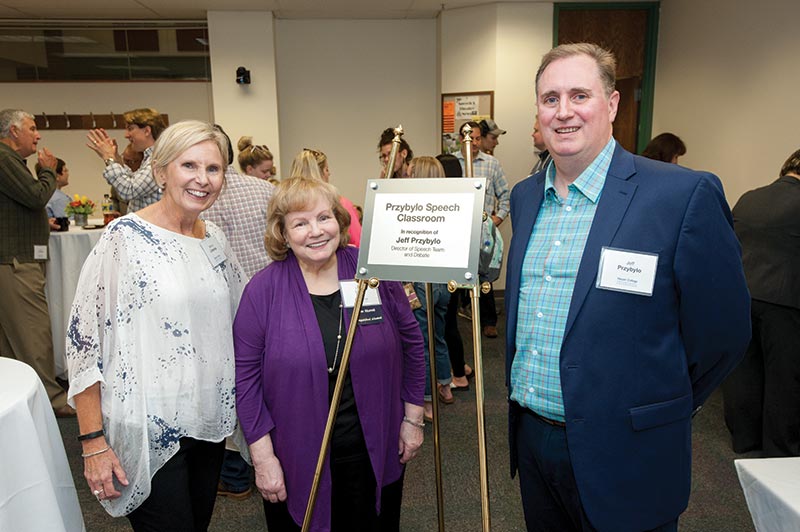 Jeff Przybylo is Chair of the Communication Arts Program, Coach for the Speech and Debate Team and Speech Professor. Linda is an alumna who attended Harper College as an adult and almost stopped pursuing her degree when she found out Speech 101 was a requirement for graduation. However, Speech 101 turned out to be the catalyst for all her future educational goals.

After graduating from Harper College, Linda earned bachelor’s and master’s degrees from Northern Illinois University and returned to Harper College as an adjunct faculty member from 1995 – 2007. During this time, Jeff and Linda worked together as Speech faculty and as coaches for the Speech Team. Even in retirement, Linda supports the Speech Team in a variety of ways, and she and Jeff maintain their friendship.

In fact, Linda and Jeff’s relationship goes back further than working together at Harper College. Back in the late 1980s, when both Jeff and Linda were in college, they were on their respective alma maters’ Speech Teams and saw each other at competitions. Jeff, as an 18 year old, remembered Linda as the “older woman” (said with sincere admiration) at their competitions, and was surprised to see Linda walking down Harper’s hallway shortly after he was hired as Harper’s Speech Team Coach. After meeting Jeff, Linda volunteered to be a coach, and thus began their long-standing relationship.

In March, 2018, Linda donated a gift in support of the Linda J. Lang Endowed Speech Team Scholarship with the intention of dedicating a classroom in honor of Professor Jeff Przybylo.