Setting Their Sights Toward Space 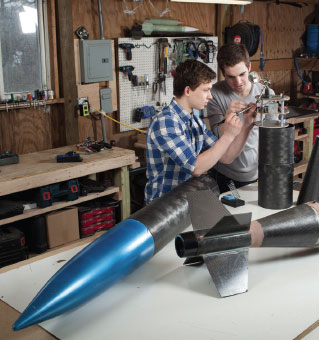 When the metaphors about launching a career, taking off with education and reaching for the stars fall away, the five students known as the Rocket Boys still stand. And in their hands, a fourth place honor awarded by the NASA University Student Launch Initiative for designing and building a rocket that could fly a mile into space and then safely return to Earth.

The Rocket Boys, Harper students, some of whom had rocketry experience and others who didn’t even know how to use power tools very well, came together in the summer of 2012 to apply for the NASA program for colleges and universities. “I went into this blissfully ignorant,” says Chris Wessel, 20, who hosted most of the building and testing in a crude pole barn at his home.

But nine months—and hundreds, maybe thousands, of hours and enough financial expenses to fill a spreadsheet—later, the team was no longer naive or inexperienced. They were space engineers, competing against 35 other college and university teams that included MIT, Northwestern, Georgia Tech and Purdue.

The team, made up of Scott Mueller, Craig Babiarz, Chris Wessel, Eric Meyers and Kevin Compton, spent 12-hour stints building, pulled all-nighters writing monthly reports to NASA and found ways to combine the skills they brought to the workshop table and learn more as they went.

“This Took Up Most Of My Life”

For team leader Mueller, who pushed the research and application forward in the first month with Babiarz, the hours also included recruiting the rest of the crew. They reached out to people they knew, and pitched the idea to Harper’s engineering club, math and science classes. In one of those classes, they found Wessel, who had never been a part of a project at this scale and was impressed by their ambition.

“This project took up most of my life,” Wessel recalls. “If I wasn’t at school studying or at home trying to get some sleep, I was in my garage working on the rocket and helping solve the various problems that popped up.”

“It wasn’t uncommon for several of us to [stay] at a teammate’s home for several days before a deadline to finish a report,” Mueller says. “Of course, throughout all of this, we had to actually build several rockets.”

Harper College served as an endorsing partner to the team, and faculty sponsor and physics professor Maggie Geppert says the “staggering” amount of time the students put in helped them qualify for a $3,000 grant from NASA. But the technology needed required far more funding. Harper provided resources, and the team acquired more from Northrup Grumman and a Resource for Excellence grant from the Harper College Educational Foundation.

The Rocket Boys were scrappy, turning a three-sided structure without doors into a workspace and the birthplace of a reusable rocket with three complex “payloads,” including a four-legged robot programmed to eject and return to the launchpad on its own. The robot was designed to simulate the unmanned ground vehicle sent to Mars. Would this show that good science and engineering doesn’t require an Ivy League name or state-of- the-art facilities? Perhaps. When the team emerged from the wood-stove heated garage, it seemed like a good possibility.

“Even the little guy has a fighting chance”

NASA judges evaluated each of the 35 rockets on technical design reviews, the operation of the payload and flying altitude—as close to one mile as possible, without going over. Teams were also assessed on their written reports and websites documenting the experience, and their enthusiasm for rocketry.

What happened next, Meyers describes as “unbelievable” and “unimaginable,” particularly considering who the Harper team was up against.

The Rocket Boys placed fourth, and the aircraft they’d invested time and dollars, sweat and ingenuity in for nine months, landed just 45 feet from the mile mark.

“I felt very accomplished,” Wessel says, looking back over the list of “prestigious schools” that he says goes on and on. Babiarz was overwhelmed with relief. “Our rocket performed better than in any of our past launches,” he says. “Recovery functioned as planned and no damage was sustained…this was as much as anyone could have asked.”

What Happened After The Flight

The Rocket Boys returned home, to their lives and jobs and schooling, each of them carrying lessons learned from the nearly year-long excursion with the rocket, the garage and one very ambitious idea.

Babiarz now studies aerospace engineering at University of Illinois at Urbana-Champaign, where he works with a computer vision team to build a full-size aircraft. Mueller is in mechanical engineering at Northwestern. Wessel, who says the project propelled him into a mechanical engineering major, is also at U of I. Both Meyers and Compton are currently enrolled at Harper. The Rocket Boys have culled lots of advice for other students who may want to send a rocket built from scratch a mile into the air.

“Don’t let a lack of experience deter you from getting involved,” Barbiarz advises. “Before [this project] only one of our team members had experience in high-power rocketry. The rest of us learned as we went along, making plenty of mistakes along the way.”

And perhaps to the kids still building with Legos and sitting in math classes and looking toward the stars, the best advice for this kind of challenge has nothing to do with equations and dollar signs and time sheets, as evidenced by Wessel’s big takeaway.

“Even the little guy has a fighting chance,” he says.

How Can You Stand With the Rocket Boys?

The Rocket Boys represent a few of the students with big ideas and the smarts to put them into action. Contributing to the Educational Foundation could fund new teams of students in technology, design, education and other wide-scale projects.