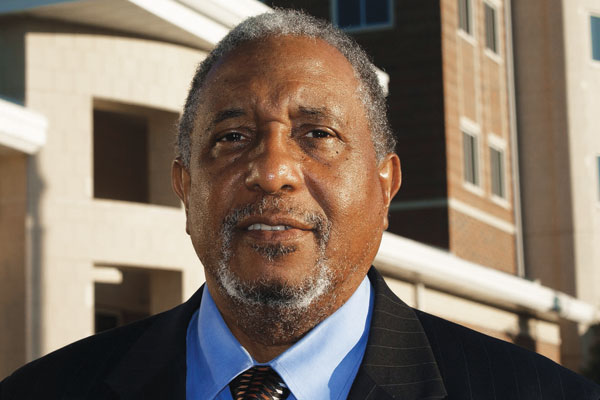 On the 60th anniversary of the Freedom Ride demonstrations in which hundreds of Black activists boarded buses traveling through Southern states to protest segregation, the Harper College Theatre Arts Department is furthering the conversation with a production of “Too Heavy for Your Pocket,” Jiréh Breon Holder’s exploration of the struggles those activists faced in joining the movement.

The conversation begins on March 28 with a dialogue between civil rights leader Dr. Bernard Lafayette, Jr., who participated in the Freedom Rides, and Harper College Associate Professor of Theatre Kevin Long; Harper theatre student Jeremy Haynes, who plays the lead role of Bowsie; dramaturg Mary T. Christel; and Dorothy Walker, site director of the Freedom Rides Museum in Montgomery, Alabama. The timing of the production not only commemorates the actions of the Freedom Riders, but it also serves as a vehicle for discussion about the continuing fight for equality, according to Long, who is directing the play.

“There are moments in the play where the characters stop and breathe together,” Long said, noting the correlation with the quote, “I can’t breathe,” by George Floyd and Eric Garner. “It symbolizes the promise of something coming up or freedom from something or a calming moment. Or even as the audience, it gives us time to reflect on what has happened.”

Long said the play, which is scheduled for four performances April 21-25, likely wouldn’t have happened had it not been for the pandemic because productions at Harper typically involve as many students as possible. Social distancing measures prevented a large cast, though, so Long chose a play with an ensemble of four actors. While they will soon head to the theater to begin rehearsing in a physical space, preparations have already begun behind the scenes, Long said, adding that the work on stage will largely focus on timing and pacing.

Jeremy, a Harper student and creative writing/spoken word artist, said all the preparations have taken place virtually so far.

“It’s been interesting figuring out the space in my head. They’ve shown us pictures of the stage, and they’re helping to go over the material,” he said. “I’m trying to discover something different about my character every time I put myself in his shoes.”

Jeremy said he was first introduced to the character of Bowsie in one of Long’s classes, where he was tasked with performing one of the fictional Freedom Rider’s monologues for his final exam. The script resonated with him on a personal level, he said, because of the continuing struggle for equality that he sees in the world around him.

“I read the whole play to be more connected to the monologue and get a better understanding of the play,” he said. “I read the play and I was just crying, and I’m not a crier. It just pulled out everything that was happening with the protests at the time last year.”

Since being asked to perform the role last year, Jeremy said he has been learning more about the civil rights movement and the Freedom Rides through documentaries and other material. Long said Jeremy and other students will get an even deeper understanding of the Freedom Rider movement through the upcoming conversation with Dr. Lafayette.

“He can ask questions and get info to create a truthful, authentic, meaningful representation of what the Freedom Riders were going through,” he said.

Long was put in touch with Dr. Lafayette by Freedom Rides Museum Director Walker, who also will speak at the upcoming forum.

“I’m so appreciative to have them,” Long said. “It’s not just doing a play — it’s also creating life experiences for all of the students involved and our community.”

The event “Subject Matters Discussion: Too Heavy for Your Pocket” is scheduled at 3 p.m. Sunday, March 28.