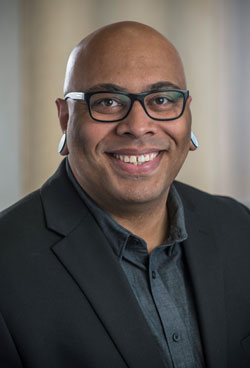 Years before Dr. Justin Harty (A.A. ‘08) became a trailblazer in the field of Social Work and an assistant professor in the School of Social Work at Arizona State University, he was a high school graduate questioning if college was the right path for him. He worked at Menards for the first few years after high school before deciding to enroll at Harper part-time.

He recalls not being the greatest student in high school and not knowing what direction his life should take. However, it was in Professor Sean Noonan’s sociology class that something finally clicked for him.

“I just didn’t know what my future was,” said Dr. Harty. “I first enrolled in Fire Science, but things quickly changed when I took a handful of sociology and philosophy courses. I knew that was the path for me.”

He credits Professor Noonan, who passed away earlier this year, and Harper College faculty member John Garcia with igniting his passion for both sociology and philosophy.

“Sean made an impact for me. He was the first one to expose me to activism and really encouraging dialogue around uncomfortable topics of conversation,” said Dr. Harty. “My time at Harper, at points, was harder than any education that came after that.”

After seven years of part-time enrollment, and working jobs to support himself through, he persevered to achieve his Associate of Arts in 2008. Dr. Harty continued by earning his bachelor’s degree from UIUC in 2011, double majoring in Sociology and Philosophy. He wanted to focus on the field of Social Work and knew he needed to take his education further, earning a Master of Social Work from University of Illinois at Chicago.

Following the completion of his master’s degree, Dr. Harty worked as a foster care case worker for DCFS in Chicago, a role he found rewarding and challenging. In his work, he noticed the lack of support to the many young, Black fathers currently in, and aging out of, the foster care system. He saw some support mechanisms for mothers in foster care but no support systems for the fathers.

He realized that research into this area was vital, and as a Black man in the field, he found that many of these cases were referred his way. With a goal of contributing to research and making change in this area, he applied to several top doctoral programs in the country including University of Michigan, Washington University and University of Chicago. He was accepted into them all.
Justin Harty officially became Dr. Harty when he earned his Doctorate in Social Work in May 2022 from U of C. He successfully defended his dissertation “Fatherhood in foster care: Black fathers aging out of foster care in Illinois.” In his acknowledgements section of his dissertation, he thanked the Harper College professors who sparked his passion and gave him the foundation he needed: Sean Noonan and John Garcia.

He now gets to share that love and passion, along with continuing his research, with students as Assistant Professor in the School of Social Work at Arizona State University where he started this fall.

“I love social work because it helps people live in the world as we want it to be,” said Dr. Harty.

Justin Harty and family at his UIC graduation upon completion of Master’s degree.

Dr. Justin Harty and family at University of Chicago graduation in May 2022
Last Updated: 9/20/22