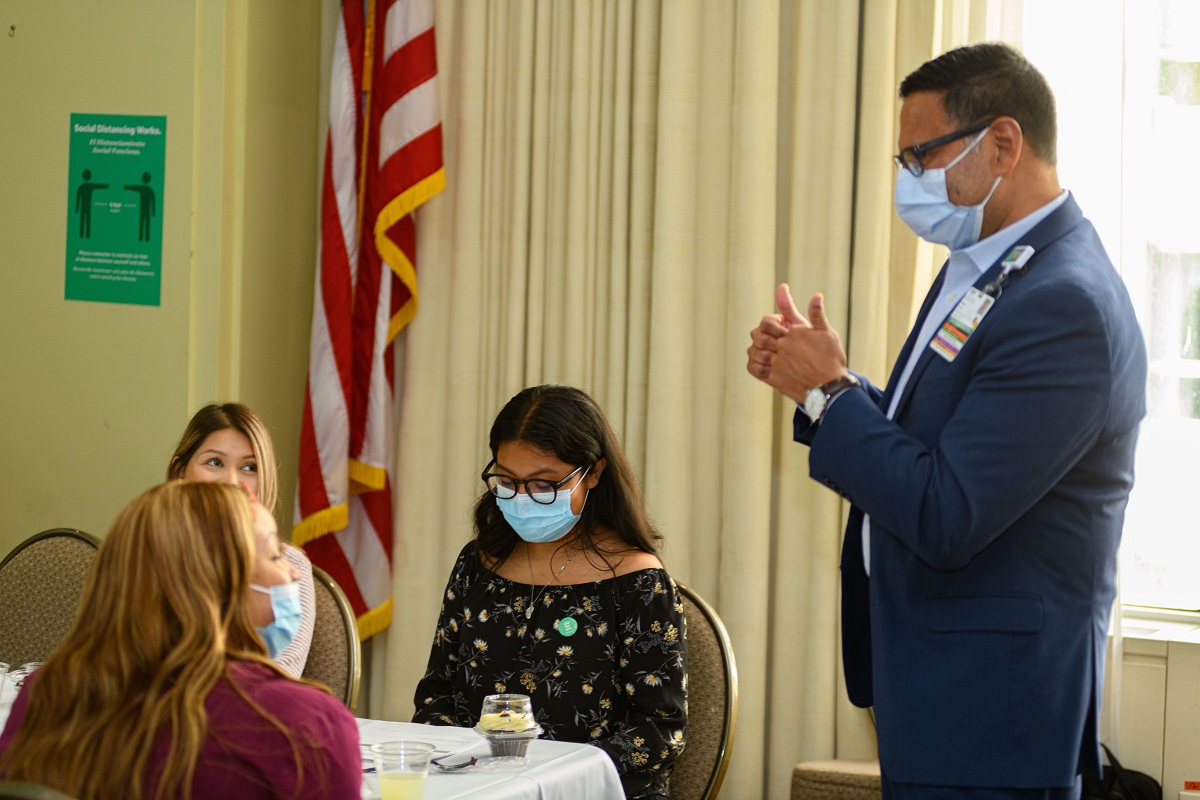 The two organizations recently partnered on the Medical Assistant Apprenticeship Program, which began with the fall semester. A 22-member cohort will receive Harper instruction while gaining on-the-job experience at Rush’s medical facilities during a period of 18 months. Rush is covering all educational costs (tuition, fees and books) while paying apprentices’ salaries.

At the program’s end, apprentices will be eligible to take the Certified Medical Assistant exam and begin their full-fledged employment with the Chicago-based system of hospitals and health care facilities.

Apprenticeships are relatively new to the health care sector, with only a handful of apprenticeship programs for medical assistants offered nationwide. Leaders at Rush and Harper were eager to look beyond traditional pipelines for hiring medical personnel. Like most health care organizations, Rush has been experiencing staffing shortages exacerbated by the COVID-19 pandemic.

“Our numbers were significantly lower,” said Molly Moran, director of Ambulatory Clinical Practice at Rush. “The number one barrier to completion of certification was an inability to work and go to school simultaneously. Many potential staff were supporting their families and were forced to stop their studies before completion.”

To remove that barrier, leaders at Rush pursued an apprenticeship program that would create a functional balance between work and training. They reached out to Harper because of the college’s reputation for health care education and partnering with local industries.

“We’re well-known for quality in health careers,” said Kathleen Canfield, senior director of Job Placement and Workforce Solutions. “The number of our graduates who pass state exams is extremely high.”

Moran concurred: “Harper had apprenticeship expertise combined with a strong Certified Medical Assistant program. It was easy to see how the two would meld together.”

Those facets combined well according to Canfield and Moran, who also praised the collaboration between stakeholders at Harper and Rush. Members of both organizations began meeting regularly in February, working on a “punch list” of tasks to ensure success.

When it came time to announce the program to applicants in the spring, everyone felt that the apprenticeships would be attractive (“Who doesn’t like free?” chuckled Moran), but both Canfield and Moran were blown away by the volume. More than 3,000 individuals applied to join the program.

“The response was overwhelming,” Moran said. “And it went against what others were telling us about a lack of interest [in health careers]. The response validated our approach. It proved that we needed to adapt.”

Canfield highlighted the work of Harper’s Admissions Outreach team in processing thousands of applications while maintaining lines of communication between everyone involved, enabling a final cohort of enthusiastic apprentices.

“It’s important because this will truly fill a need for Rush,” Canfield said. “What employer is going to be able to hire 22 people, not to mention 22 highly trained medical assistants, in one go?”

Those soon-to-be medical assistants will be critical for Rush, according to Moran, who described the variety of duties involved for these patient-facing roles: checking in patients, instructing them about medication and ways of care, administering medication, implementing plans of care and more.

Along the way, the apprentices will work at one of four Rush locations: Oak Park, Oak Brook, in Chicago’s South Loop and Rush University Medical Center on the West Side. The majority of their Harper courses will be online, although a couple will be in person due to the necessity of hands-on learning. Rush will provide a free shuttle for apprentices to Harper’s Palatine campus and back to its medical center.

That’s not the only way Harper and Rush are supporting the cohort. For example, each apprentice will be designated an apprenticeship coach at Harper to help them navigate everything involving their studies, online or on campus. Meanwhile, working at Rush will demonstrate the scope of their roles.

“Health care is changing so rapidly. By working in some capacity in the role they will be in after they graduate, they can immediately apply what they learn in the curriculum,” Moran said. “There will be less of that theory-to-practice gap. They will have exposure to multiple different clinics and types of clinics.”

In exchange for participating in the program, the apprentices agree to work for Rush for one year after completion of the 18-month program. Not only will all apprentices have a guaranteed job in their field, they can also stack their courses into an Associate in Applied Science degree, just like traditional Certified Medical Assistant graduates.

Although the Medical Assistant Apprentice Program has only just begun, Rush and Harper are discussing future plans.

Canfield called Rush one of Harper’s best partners and said she was excited about what the future may hold.

“We want employers to look at Harper as their preferred provider. We always want to work with them,” Canfield said. “What we can provide – it’s a long list.”