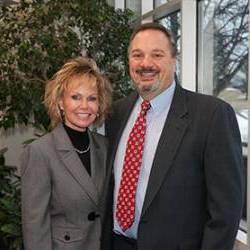 Donna Grzegorek and her husband Michael.

Donna Grzegorek earned her degree in dental hygiene from Harper College in 1980. Though she had initially planned to attend a 4-year university, Donna decided to attend Harper after learning that Harper graduates achieved higher scores on the national board exams than graduates of other programs.

When Donna received the Harper College Distinguished Alumni Award in 2011 she said of her experience at Harper, “I love what I do. None of this would be possible had it not been for the perspective, direction and encouragement that I received during my tenure at Harper College.”

Now Donna is offering that same direction and encouragement to future Harper students by establishing the Donna Penkava Grzegorek Dental Hygiene Scholarship Fund. The scholarship will help with tuition, books and fees for students enrolled in Harper’s Dental Hygiene program.

Donna is a well-known and respected name in the dental community. She has had a distinguished career over the last 30 years, as evidenced by the many accolades and industry recognitions she has received, including 3 national awards: the “Dental Hygiene Award of Distinction,” “Hygienist of the Year,” and “Hygienist Hero” awards. Donna has become a key opinion leader in the dental community in the area of early oral cancer detection.

She is a published author, national speaker, corporate consultant, student mentor and practice coach and has volunteered hundreds of hours in the community to advance public awareness about a variety of dental topics.