View items and images from the life of Dr. Harper

William Rainey Harper seemed destined to become a revolutionary agent of change in American higher education. He was born to Samuel Harper and Ellen Rainey on July 24, 1856. His birth home, a five room log cabin located in New Concord, Ohio, remains intact in its original location and is owned and operated by Muskingum College. 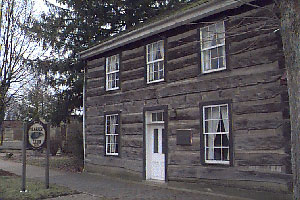 During his childhood, young William supported his father's business by purchasing and selling wool and by helping dam a local stream to produce and sell ice. He also developed a fondness for books and learning at a very young age (in fact, he was able to read by age three), and his parents, taking notice, decided to foster his inclinations to study by teaching him at home. Consequently, he was far ahead of other children his age, earning a college degree at the age of thirteen in 1870, and his Ph.D. by 1875, when he turned eighteen. He took a quick break from academics to marry Ella Paul, daughter of the president of Muskingum College, and then proceeded onto the next phase of his life.

Dr. Harper had earned his Ph.D. as a student of languages, and soon got the opportunity to teach Greek, Latin, and Hebrew at Masonic College in 1875, where he took over as the institution’s principal. Soon thereafter, he became the principal of the preparatory school at Denison University in Granville, Ohio, teaching classes in Hebrew to the faculty. As a professor, his classes in Hebrew and biblical studies were widely popular. In fact, by 1883, colleges around the country were asking him to come teach Hebrew in their summer schools, and by 1906 (the year of his death), he was counted amongst the foremost scholars of Hebrew in the United States. 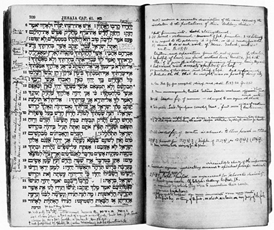 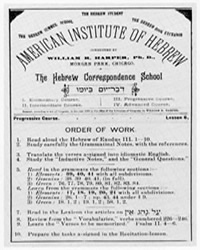 Morgan Park Academy, located in the city of Chicago, soon took an interest in Dr. Harper’s academic credentials, and he began teaching classes in Hebrew and the Old Testament there in 1879. While there, he expanded the educational services offered by the Academy, first by enacting summer school classes in 1881, and then by creating correspondence courses, in which students would correspond by mail with the professor in lieu of attending classes in person. Dr. Harper hoped that by offering these special courses, students who lacked the time or money to journey out to the campus to attend classes would still be able to receive an education. By 1889, there were between five and thirty summer schools in operation around the country. He also proposed sending university lecturers out to nearby cities.

These innovations in higher education got the attention of Yale University, and they eventually secured his employment in 1886 as a professor of Semitic languages.

During this time, he also accepted a position with the nearby Chautauqua institution. While in New York, he became a close associate of John D. Rockefeller, the owner of the Standard Oil Company, who, in 1890, convinced Dr. Harper to lead an educational institution in the Midwest - one that could rival Yale and other eastern universities. While agreeing to an initial commitment of $600,000, ultimately, Rockefeller and his foundations contributed some $80,000,000 towards the creation of the University of Chicago. Dr. Harper’s endless enthusiasm and fund-raising abilities were crucial to the early success of the enterprise.

The University of Chicago opened its doors in 1892, and as its first president, Dr. Harper attempted to attract world class educators to the school, and continued to secure funds from Rockefeller. In doing so, he did not endear himself to other college presidents. He believed that the quality of the faculty was of primary importance in creating a great institution of higher learning, and so he ruthlessly raided other colleges for the best minds in the country. Less than two years after founding the University of Chicago, he managed to build the faculty to a total of 120 members (including eight former presidents of other colleges and universities) and the school into a 10 building campus. In developing his faculty, Dr. Harper offered a series of benefits, such as freedom from outside influences, reduced teaching loads, and excellent salaries that far exceeded the existing wage structure. 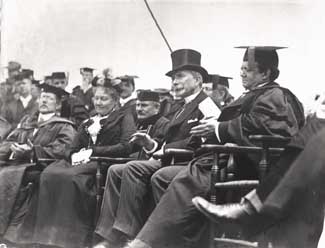 In his view, the ultimate goal of higher education was to create serious scholar-researchers; the enterprise was unapologetically academic. Consequently, undergraduate students were expected to eventually focus their studies in two or three areas, not just sample a variety of different disciplines in order to attain a kind of gentlemanly polish by the end of their four years. Under this model, the first two years were a preparatory period devoted to general education – the foundation from which to build knowledge in specialized areas during the third and fourth years. From this, Dr. Harper got the idea of creating “junior colleges” to focus on that preparatory period, thus allowing universities to focus on more advanced studies, and advocated this split during the first meeting of his new faculty after the University of Chicago opened. While some educators argued that this division of junior colleges from research universities provided ordinary people with access to some degree of higher education (which would otherwise not have been available to them), others have come to believe that this vision was elitist in that it attempted to limit the University's functions to those of research and advanced professional training, rather than democratizing access to higher education.

Although the idea of moving the junior college off campus never came to fruition, a friend of Dr. Harper, J. Stanley Brown, sought to put his ideas into action. Under Brown’s guidance, Joliet Junior College was established in 1901, and is today the nation’s oldest community college. In 1965, residents of the northwest suburbs of Chicago sought to create their own community college in order to provide access to higher learning for their children, and the result was the creation of William Rainey Harper College, which opened in 1967.

Harper College has continued Dr. Harper's dream of expanded access to higher education for all citizens. The college offers courses for students interested in obtaining degrees, continuing their education, or pursuing side interests and hobbies, and it offers classes during the day, nights, and weekends for traditional and non-traditional students alike. In addition, both traditional classroom courses and distance learning courses delivered in online, blended, and teleweb formats.

---. The Trend in Higher Education. Chicago: The University of Chicago Press, 1905. Print.

Morrison, Theodore. Chautauqua : A Center for Education, Religion, and the Arts in America. Chicago: University of Chicago Press, 1974. Print.