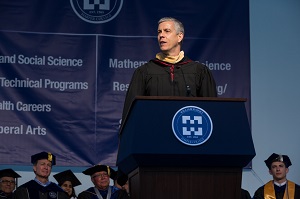 A rain delay and soggy conditions couldn’t dampen the spirits of the record number of graduates who crossed the stage at Harper College’s 49th annual Commencement Ceremony.

More than 700 graduates from the Class of 2017 receiving transfer degrees, career and technical degrees, and certificates were recognized at Saturday’s festivities at the Pavilion on the Palatine campus.

Duncan pointed to the tenacity, persistence and grit that each Harper graduate is coming away with, acknowledging in particular graduates who were the first in their families to go to college, raising a family or working while going to school.

Harper College President Dr. Ken Ender said the Class of 2017 is decidedly special because of its connection to President Barack Obama’s 2009 challenge to community colleges to produce an additional 5 million graduates by the year 2020. 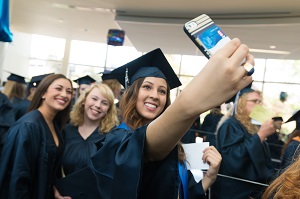 By awarding more than 3,500 credentials this year, Harper has – three years early – surpassed its goal of an additional 10,604 degrees and certificates, or the College’s share of that nationwide goal.

“You mark the class that put us over the top,” Dr. Ender said. “We’re currently at 102 percent of our goal. We did do our share, Mr. Secretary.”

Duncan applauded the achievement and took an opportunity to recognize Harper College itself, which will celebrate its 50th anniversary during the upcoming 2017-2018 academic year.

“You’ve built a culture of excellence and innovation, a culture that values inclusion rather than exclusion. You focus not just on access, but completion. You don’t work alone; you build partnerships with other colleges, with the community and with businesses,” Duncan said.

Duncan ended his remarks by challenging graduates to do three things: Commit to lifelong learning; challenge yourself to get outside your comfort zone; and find ways to serve others.

Do those, Duncan said, and “You’re going to have rich and rewarding and fulfilling lives, and you’ll look back some day and say, ‘That was a life well-lived.’”