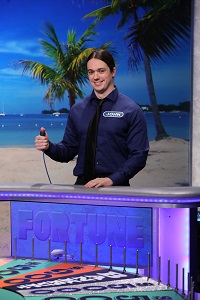 For Harper College student John Major, “Wheel of Fortune” is a family thing. He grew up watching it with his parents and his grandma, who claimed to have seen every single episode until she died.

It was fitting, then, that Major got the opportunity to head to Los Angeles and spin the legendary wheel himself.

In the end, Major was the big winner (watch the video) on the June 6 episode by advancing to the bonus round and solving this final puzzle despite having minimal clues:

“The whole thing was a blast, and Pat (Sajak) was awesome,” said Major, whose parents and girlfriend celebrated the victory with him on set. “I could hang out with that guy.”

The 34-year-old Palatine resident will wrap up an Associate in Applied Science degree in radiologic technology this summer. He’ll transfer to Southern Illinois University in the fall to continue his studies in magnetic resonance imaging and computed tomography.

He had to miss some time from his clinical site for the show taping in April, so he’s grateful to his program leaders for their support and letting him make up the work.

The only slight disappointment in the entire experience? Major had the game’s Million Dollar Wedge in the bonus round, giving him a shot at winning $1 million had the wheel landed on that envelope.

“The million dollars obviously would have been amazing, but I’ve got zero complaints,” he said.