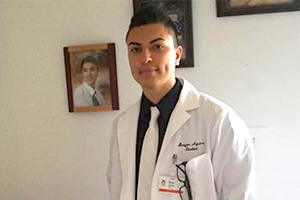 Brayan Aguirre believes he has to work harder than most other 20-year-olds.

When the Harper College student isn’t immersed in his nursing program prerequisite courses, he’s helping to support his family through his job at a rehabilitation facility in Hanover Park. The word “party” isn’t in his vocabulary.

Despite that commitment to achieving his goals, Aguirre lives day-to-day in a cloud of fear and uncertainty.

The reason? He wasn’t born in the United States.

Aguirre’s family moved to Arlington Heights from the state of Durango, Mexico, when he was just eight years old. He’s never been back to visit.

“We try to go about living our lives, putting the anxiety in the back of our minds,” he said. “But there’s always an unknown about what the future might bring.”

That unrelenting fear subsided a bit five years ago with the creation of the Deferred Action for Childhood Arrivals (DACA) program, an immigration policy allowing young people brought to the U.S. illegally by their parents to get a temporary reprieve from deportation and to receive permission to work, study and obtain a driver’s license.

After signing up for DACA*, everything changed.

For Aguirre, he could finally get a job that didn’t pay cash under the table. It meant he could legally drive. But most of all, DACA offered hope of an actual future – one that couldn’t be instantly erased in an immigration raid.

“In high school, my friends talked about what college they were going to go to, and I never allowed myself to think that way because it just seemed like a waste to plan for my future,” Aguirre said. “I always felt like I was at a disadvantage.”

After becoming a DACA beneficiary, a big turning point came senior year at Rolling Meadows High School with his acceptance into a selective medical chemistry class. He can still picture himself wearing a lab coat on a field trip to Northwest Community Hospital. That moment confirmed his desire to pursue a career in the medical field.

“My mom had always pushed me to have an interest in medicine because I had group B streptococcal meningitis as a baby and almost died,” he said. “The medical profession saved my life, and increasing access to better health care was one of the big reasons my parents moved here. I started to feel like I wanted to give back somehow. I want to take care of people and hopefully have a positive impact on people’s lives.”

Aguirre set his sights on Harper, by far his most affordable option considering DACA beneficiaries don’t qualify for financial aid. He’s the recipient of two privately funded scholarships through the Harper College Educational Foundation, which has helped ease the financial burden.

He earned his licensed practical nurse certificate and is currently finishing his prerequisite courses in a bridge program to the registered nurse degree program, which he hopes to start in the spring. He’s still toying with the idea of medical school, but thinks becoming a nurse practitioner might be a better fit after working closely with patients at the Alexian Brothers geriatric psychiatry unit and now at Symphony of Hanover Park, a rehab facility.

“I firmly believe in the importance of caring and compassionate bedside care,” Aguirre said. “I want that close patient interaction.”

What happens after he finishes the nursing program remains a big question mark, however. That cloud of uncertainty has resurfaced following the U.S. Attorney General’s announcement earlier this month that DACA will be phased out over the next six months.

“My DACA expires in August 2018, and I’m not able to renew it,” he said. “I’ll still be in school through that December. Will that change? Will I be able to take the state licensing exam? What does all this mean?”

Still, Aguirre has no plans to let up or change course.

He seeks support and resources through a Facebook group for Harper DACA students and a new group on campus that recently started meeting. He’s also getting more comfortable sharing his story.

“All the hateful speech surrounding this issue is really hurtful,” he said. “I just try to rise above it all and educate people when I can. I tell them about my life. I tell them that I’m not a criminal. I tell them that I work hard. I’m just like all the other DACA students who just want to get our degrees, work and contribute.”

*Since DACA was enacted under President Barack Obama, about 800,000 immigrants who were children when they arrived in the U.S. illegally have received protections from the program. Requirements for applicants: