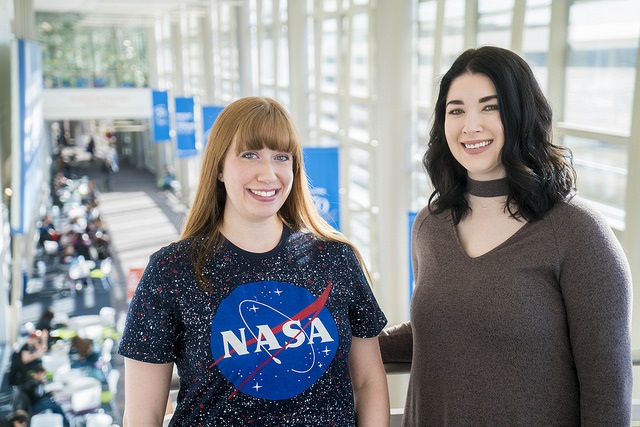 Two Harper students earned a trip to NASA through a vigorous competition for the coveted NASA Community College Aerospace Scholars program (NCAS). Valerie Burton and Mallory Drevline were among 171 community college students from across the country to be selected for the NCAS three-day, onsite experience. Both students recently completed the program with trips to NASA centers.

Both students found out about the program through the Engineering Department at Harper. Burton learned about the program through her involvement in Harper’s Society of Engineers. The application required her to not only submit a personal essay about why she wanted to attend the program, but she needed a letter of recommendation. Being a computer science student, she naturally approached her Introduction to Java instructor, Larry Schoeneman, for the recommendation.

Drevline discovered the information about the program on the Blackboard page for the Women in Science and Engineering (WISE) club. Intrigued by the idea, she reached out to Dr. Kelly Page, Astronomy and Physics professor, for her letter of recommendation.

Being accepted to the program meant they were committing to a five-week online course in addition to their current Harper course load. Only if they successfully completed the course would they be invited to a NASA site to learn more about the history of NASA, tour the facilities, attend briefings by engineers and scientists, and participate in a team project. Their hard work paid off, and they were rewarded with an all-expenses-paid trip to NASA. The experiences did not disappoint.

“I got to go to the buoyancy lab where the astronauts train,” Burton said. “We also got to meet people who worked or interned at NASA. One of them helped save the astronauts who were on the Apollo 13 mission.”

Drevline, too, saw some of NASA’s facilities and equipment used in space travel.

“We saw engines that are going to Mars,” she said, and the realization was impactful. “It felt like, ‘Wow!’ that is going to be in space. It is going to travel hundreds of thousands of miles, and we saw it first.”

The main component of each onsite event was a multiday, group exercise developing fictional companies interested in exploration on Mars. Each team was required to anticipate every aspect of building a rover robot, from the financials to programming to the actual construction and testing of the robot.

While they enjoyed the robot building competition, both students said their favorite part of the program was meeting fellow STEM students and making connections with them.

“I met so many like-minded people who were all going into the STEM field. We had common interests and the same goals in mind,” Burton said. “I’ve met a lot of lifelong friends.”

Drevline said studying at Harper not only allowed her to join the WISE club and Astronomy club, but also helped prepare her for the NASA program.

“Harper definitely taught me how to be thrown into a situation with strangers and be able to have the confidence to talk to them and work with them.”

Burton said she hadn’t considered a career at NASA, but through her education at Harper and the NASA program, she now knows that is a possibility.

“I saw myself using a lot of the skills I learned in my computer science class this year. Harper helps you understand that you’re really capable of so much more than you think,” she said. “I went into the program thinking, ‘Oh, I don’t see myself working here, but that would be a really cool thing to try anyway, just to see what it’s like.’ Now it would be a top goal of mine.”

They both encourage other STEM students to take advantage of the opportunities available to Harper students, even if they are hesitant.

“It kind of seems intimidating at first,” Burton added. “But just put in a little bit of effort and work hard. It’s a great hands-on experience for anyone who’s looking to go into one of the STEM fields. It really motivated me to keep pursuing the field.”