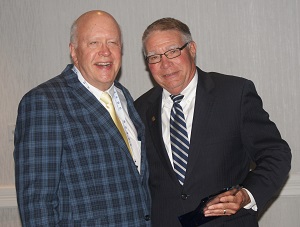 The occasional award recognizes individuals who have made an outstanding contribution to the pursuit and support of ethical leadership and decision-making in their fields of work and volunteer service, according to ICCTA Executive Director Michael Monaghan.

Dr. Ender, who has worked to position Harper as a 21st century community college over the past nine years, accepted the award on June 1 at the Annual Community College Convention and Banquet in Springfield.

In supporting his nomination, Harper Board Chair Greg Dowell and Trustee Diane Hill called Dr. Ender a respected local, regional and national thought-leader on the future of community colleges. They pointed to his compelling student success agenda and laser focus on retention and completion, leading to record graduation rates under his leadership.

Numerous other accomplishments were recognized including:

“I fully embrace and honor the values connected to this award,” said Dr. Ender, describing the recognition as “a meaningful way to recognize more than 20 years of service as a community college president.”