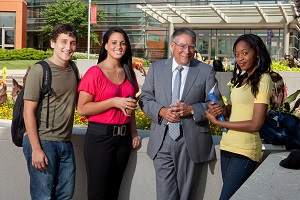 The day after Dr. Ken Ender was selected to become Harper College’s fifth president in 2009, he made three phone calls he considered to be critical.

He reached out to the superintendents of Harper’s three high school sender districts, wanting to assure they’d be a top priority.

“I just couldn’t conceive how you could weave together a curriculum that connects the high school years to the pre-baccalaureate years without people at least sitting in the same room, and it was clear that hadn’t been happening,” Dr. Ender said.

For too long, each organization had worked in isolation. They were missing an opportunity to share talent and data and leverage joint resources. They had to learn to work as an educational system, Dr. Ender thought, rather than a disconnected group of institutions. He aimed to set a new stage, starting with those calls.

“I think they were stunned and pretty delighted to hear from me literally the day after I took the job,” Dr. Ender said. “It wasn’t what they were used to from Harper. Then they said, ‘OK, prove it.’”

After a year of regular meetings between the four leaders, they formalized their newfound partnership in 2010 by establishing the Northwest Educational Council for Student Success (NECSS). The consortium aims to better prepare students for 21st century careers and postsecondary readiness and success.

The strides made as a result of this unprecedented regional collaboration have been remarkable.

Among the most impressive has been the push to increase college readiness in math. In 2009, just 48.8 percent of recent graduates from Districts 211, 214 and 220 enrolled at Harper college-ready in math. That meant more than half of students from the sender high schools placed into non-credit bearing, developmental math courses – making them far less likely to ever complete a certificate or degree.

By 2017, that number had skyrocketed, with 83.8 percent of sender high school students college-ready in math.

Harper College Trustee Dr. Nancy Robb, also the District 211 Superintendent at the time NECSS was established, said the consortium resulted in the immediate improvement in communication between the four partners.

“Ken’s vision to create a formal partnership with the high school districts to address student success was the first-of-its-kind in Illinois,” Robb said.

The most advantageous aspect of the partnership, Robb said, was the data sharing and curriculum development that took place with the high school and college instructors. That collaboration and alignment led to the launch of numerous dual credit courses through Harper, and a charge for students to earn 15 college credits while still attending high school.

Just 408 students, or 6.2 percent of students graduating from high school in 2010, participated in dual-credit coursework at Harper. In last year’s graduating class, 2,631 students – or about 41 percent of the class of 2018 – took dual credit at Harper. Today, NECSS partners offer the highest percentage of dual credit offerings in Illinois.

“That expansion of early college credit opportunities is something that would not have happened without the breaking down of barriers between schools and within departments,” Robb said.

NECSS Vice President and Board Chair Dr. Kenya Ayers, a former academic dean at Harper, underscored the commitment by each of the partners to build an infrastructure that provides a framework for NECSS’ initiatives.

Each organization’s Board provides financial support and approved an intergovernmental agreement. Dr. Ender and the three high school superintendents comprise the NECSS Board and approve all NECSS financials, plans, policies and proposals. Harper’s provost and the assistant/associate superintendents provide leadership through a Coordinating Council that serves as a standing committee of the Board.

NECSS has emerged as a national leader in the arena of secondary-postsecondary collaboration for college and career readiness.

“Dr. Ender is a disruptive innovator who clearly understands what’s happening nationally,” Ayers said. “He knew we needed a structure in place, he brings that perspective to our Board meetings and has put resources behind the vital work we do.”