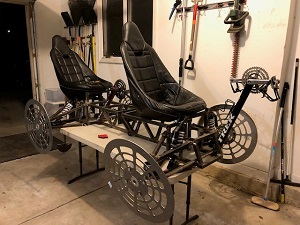 A team of students from Harper College has been hard at work preparing for a journey – one that will take them to a simulated faraway world where they will explore undiscovered and often perilous landscapes.

While the voyage won’t actually be made on the cold, cratered terrain of the Earth’s moon or the barren, rocky surface of Mars, it will take place in a real space rover designed and built by the 10-member team.

The project marks the first time Harper students will compete in the NASA Human Exploration Rover Challenge, which takes place April 12-13 in Huntsville, Alabama. The Harper College Rover Design Team will face off against nearly 100 high school, college and university teams worldwide at the U.S. Space and Rocket Center, where they’ll navigate an artificial field of asteroid debris, treacherous crevasses and other rugged terrain throughout the half-mile course.

The team was assembled by 19-year-old student Torian Fiedler of Arlington Heights, who said he was determined to get the project going after learning that the Harper Society of Engineers regularly competes in contests that give students hands-on engineering experience.

“I started talking to people from my classes and at the tutoring center and met some people who were very passionate about the project,” he said.

By November, he had his team of civil, mechanical and bioengineering students and began working on the design. Their vehicle, which is big enough to carry two pilots – one male and one female, as required by the contest rules – can be folded into a five-foot by five-foot cube.

The team has faced numerous challenges getting the project off the ground. Every part of the vehicle down to the rubber for the tires, for instance, must be built by the students, according to Maggie Geppert, an Associate Professor of physics at Harper who sponsored the team for the competition.

“The students can’t just get bicycle tires and put it on the rover, they have to design it and manufacture it themselves,” she said.

Valeria Vesco, a 21-year-old student from Hoffman Estates, said she and two other team members focused 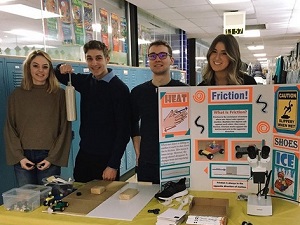 on the wheel design and relied on direction from Assistant Professor Chris Athanassopoulos, who helped them navigate engineering-design programs like AutoCAD and Solid Edge.

“Seeing this go from the computer to the 3D-printer to real life was really cool,” she said.

Geppert said a few of the team members have manufacturing experience – they are pursuing a degree in Harper’s Advanced Manufacturing Technology program – and others are trained in welding, machining and other skills necessary to craft the vehicle.

The team received a grant from the Harper College Educational Foundation to help fund the project. Students have also had to fundraise and establish relationships with various manufacturers of parts needed for the project.

Team member Geovanni Reyes, 20, who lives in Wheeling and plans to study mechanical engineering at the University of Illinois, was recruited by Torian when the two met in Harper’s math tutoring center.

“Since then, I’ve been the lead designer for this, a supervisor and I handle all the money – I didn’t really get a spring break,” he said with a laugh. Geovanni said the project has been a challenge because everything has to be built from scratch. “It’s all about research and trying to piece puzzles together,” he said.

The team members are grateful that the competition has helped them become engaged with Harper. Valeria, for one, said she’s made several new friendships through the project.

“A lot of people on the team I’ve seen before around Harper, but I never reached out to them,” she said. “Now we’re all friends and united as a team, and it’s really cool to see.”