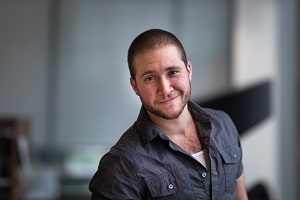 Dean Kapolas suffered from a crippling self-hatred when he first started at Harper College seven years ago, unable to live authentically.

The 18-year-old’s debilitating mindset perpetuated his drug abuse. His struggle with mental illness impeded his ability to be productive. He eventually withdrew from college – and most anything in his life considered positive or healthy.

The bottom later dropped out when his roommates kicked him out, leaving him homeless.

“I had a moment in my car trying to fall asleep thinking, ‘This is not for you. You need to ask for help,’” Dean said. “But it was hard. I always had the mentality that I wouldn’t live past 25 years old. I couldn’t imagine a future, so I lived my life like that.”

At the time, Dean was still Danielle, who was assigned female at birth.

He turned to his parents, who helped get him into a 12-step addiction recovery program. He got clean. Slowly, his self-worth started to materialize, as did a determination to live as the person he had long known he really was.

“I wasn’t able to live as me for a long time,” Dean, now 26 and living in Palatine, said. “But I made it through and emerged as trans.”

Dean returned to Harper in fall 2016, right around the time he began his transition as a transgender man. This time, he was ready – and receptive to possibilities.

Dean committed to his studies and discovered a passion for psychology. He got involved in the psychology club and volunteered at places like the Community Crisis Center in Elgin. He spent time at the gym and embraced mindfulness and meditation, leading to a healthier lifestyle and significant weight loss.

He was also invited to join Harper’s Honors Program and found strength in connecting with his professors and classmates.

“These are people who truly care about different perspectives,” he said. “Being part of that has really helped me regain hope. They see something in me that I’m still working to find.”

Monica Edwards, professor of sociology, said Dean is the kind of student who teachers can both teach and learn from.

“Dean is a courageous student, willing to put himself fully into the learning process – allowing for creativity and mistakes and thus humanity – and willing to deeply explore and understand the lives of others,” Edwards said.

Dean jumped at the opportunity to present at three collegiate honors conferences, where he explored the psychological, sociological and biological aspects of being transgender, whether men can be feminists, and how faculty can better welcome and integrate the LGBTQ community into their classroom. He also served on a panel examining diversity at the National Collegiate Honors Council’s annual conference in Boston.

Professor Alicia Tomasian reflected on the poise and personality Dean showed on the panel, who for the most part were people of color.

“‘I bet you're wondering what this white guy is doing up here,’” Tomasian recalled Dean saying. “The room broke out in laughter. From there, he smoothly transitioned into the deadly serious risks trans students face on our campuses and in life, while his audience sat on the edge of their seats. Dean has that magic combination of mastery in an academic field and the ability to present that mastery in compelling ways.”

His strides were recognized earlier this year when he was named a semifinalist for the Jack Kent Cook Undergraduate Transfer Scholarship, a highly selective scholarship that advances the education of exceptionally promising students who have financial need. Though he wasn’t ultimately selected, he’s honored to have gotten so far in the process.

Dean is wrapping up some additional classes this month after earning his associate degree last December. He’ll leave Harper with a 4.0 GPA and transfer to a four-year college – he’s leaning toward Lake Forest College or the University of Minnesota – to study psychology and gender studies. Though he still grapples with the idea of long-term goals, he’s starting to envision himself as a practicing psychologist who also teaches in academia.

Dean is grateful for the support Harper has offered as he continues his evolution – from Hawks Care, which provided food when he couldn’t afford to buy a meal, to the faculty who empowered him through his transition. Before, he said, he felt worthless; that changed with the recognition he belonged in the Harper community.

To his own amazement, Dean now finds himself on the receiving end of requests for help. People who are transitioning or know someone who is have reached out seeking guidance or just a comforting ear.

“I tell them that I don’t have all the answers, but I’m here to take this walk with you,” Dean said. “It’s unbelievable, really. I couldn’t have imagined myself ever being where I am now.”