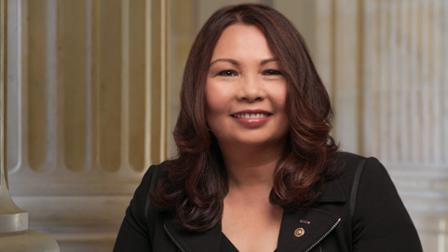 U.S. Senator Tammy Duckworth, an Iraq War Veteran, Purple Heart recipient and former assistant secretary of the U.S. Department of Veterans who was among the first handful of Army women to fly combat missions during Operation Iraqi Freedom, will speak at Harper College’s commencement ceremony this spring.

Harper College’s 54th Commencement Ceremony will be held at 11 a.m. Saturday, May 21, at the Pavilion behind Building D. The ceremony includes fall 2021 graduates and candidates for spring and summer 2022 graduation.

Duckworth has been a strong advocate for Harper and higher education. The college has worked closely with Duckworth on her Community College to Career Fund in Higher Education Act (CC2C), which builds off of Harper’s successful public-private partnerships such as the Zurich Insurance apprenticeship program that trains workers for jobs in high-skill industries like advanced manufacturing, health care and cybersecurity.

“Senator Duckworth has long been a valuable partner and advocate of the Harper College community,” said Dr. Avis Proctor, president. “I am thrilled she will be with us at Commencement to inspire our graduates as they mark this momentous milestone and embark on an important new chapter in their lives.”

Duckworth served in the Reserve Forces for 23 years before retiring at the rank of lieutenant colonel in 2014. She was elected to the U.S. Senate in 2016 after representing Illinois’s Eighth Congressional District (which includes part of Harper’s district) in the U.S. House of Representatives for two terms.

In 2004, Duckworth was deployed to Iraq as a Blackhawk helicopter pilot for the Illinois Army National Guard. On November 12, 2004, her helicopter was hit by a rocket-propelled grenade and she lost her legs and partial use of her right arm. Senator Duckworth spent the next year recovering at Walter Reed Army Medical Center, where she quickly became an advocate for her fellow soldiers. After she recovered, she became Director of the Illinois Department of Veterans’ Affairs where she helped create a tax credit for employers that hire veterans, established a first-in-the-nation 24/7 veterans crisis hotline and developed innovative programs to improve veterans’ access to housing and health care.

In 2009, President Obama appointed Duckworth as an assistant secretary of Veterans Affairs, where she coordinated a joint initiative with the U.S. Department of Housing and Urban Development to help end veteran homelessness, worked to address the unique challenges faced by female as well as Native American veterans and created the Office of Online Communications to improve the VA’s accessibility, especially among young veterans.

Duckworth is fluent in Thai and Indonesian. She attended college at the University of Hawaii and earned a Master of Arts in International Affairs from the George Washington University. After graduation, she moved to Illinois and began pursuing a Ph.D. in Political Science at Northern Illinois University.

Duckworth and her husband, Bryan, are the proud parents of two daughters, Abigail and Maile.