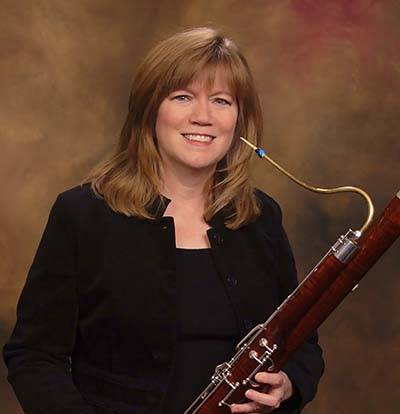 Dianne Ryan of Carpentersville, Illinois, earned a B.A. from Virginia Tech in music performance and an M.M. from Roosevelt University’s Chicago Musical College in bassoon performance. She then played with the Civic Orchestra of Chicago for two seasons for her orchestral training.

Ryan performs regularly with Chicago area orchestras such as the Elmhurst Symphony, New Philharmonic and Light Opera Works and is a member of several chamber ensembles. She has toured Europe and Asia with the Chicago Chamber Orchestra and Chicago Symphonic Pops and has performed with pop artists such as Mel Torme, the Moody Blues, Ray Charles, the Beach Boys and Final Fantasy.

She can be heard on numerous recordings and has appeared as a featured soloist with New Philharmonic and Elmhurst Symphony. In addition to Harper College, she has been on the faculties of Concordia University, VanderCook College of Music in Chicago, Elmhurst College, Trinity International University, Lake Forest College and Merit School of Music and is the founder of the popular “Bassoon Boot Camp” for young bassoonists. Ryan has enjoyed giving clinics around the United States, including the national Bands of America Summer Symposium for seven years, Butler University Bassoon Day and Roanoke (Virginia) Symphony Orchestra Youth Camp.