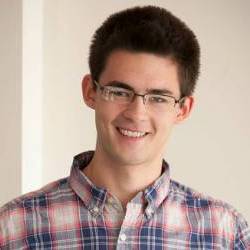 A 2016 graduate, Harper alum Ryan Eberhardt just made his way to Palo Alto, California to begin his junior year at Stanford University, where he plans to major in computer science and then pursue a master’s degree. Though he was in the Engineering Pathways program at Harper and guaranteed transfer to the University of Illinois, Ryan ultimately felt Stanford’s student body and Silicon Valley location would lead to more opportunities in the field of software engineering.

Ryan is proof that the sky’s the limit at Harper. Though enrolling was a no-brainer (four younger brothers at home meant he’d be footing his own tuition), the Schaumburg native quickly embraced Harper as more than just the affordable option and made the most of his two years.

In the end, he finished with a 4.0 GPA, belonged to the Honors program and Phi Theta Kappa, served as president of the Society of Engineers and received the Motorola Solutions Foundation Award for Excellence and the Excellence in Discipline award in both English and the humanities.

In addition to the financial support from the Harper College Educational Foundation, Ryan is grateful for the individualized education Harper provided him and the high level of rigor.

“I never wanted to sit in a big lecture hall where people can get away with sleeping,” he said. “The professors pay attention to you at Harper, and that’s really powerful. I feel prepared.”

Professor Deb Damcott, the physical sciences department chair, said she particularly appreciates Ryan’s curious spirit and his desire to experience everything from music and writing to business and outdoor adventures.

“Ryan is the kind of student you see once or twice in a career, if ever,” she said. “His remarkable intellect is surpassed only by his character. Ryan is very grounded and unassuming. He is generous with everyone and this makes him a tremendous leader. I'm very grateful to have had Ryan in my class and as part of the Pathways program, and I'm extremely excited to see the successes his future holds.”