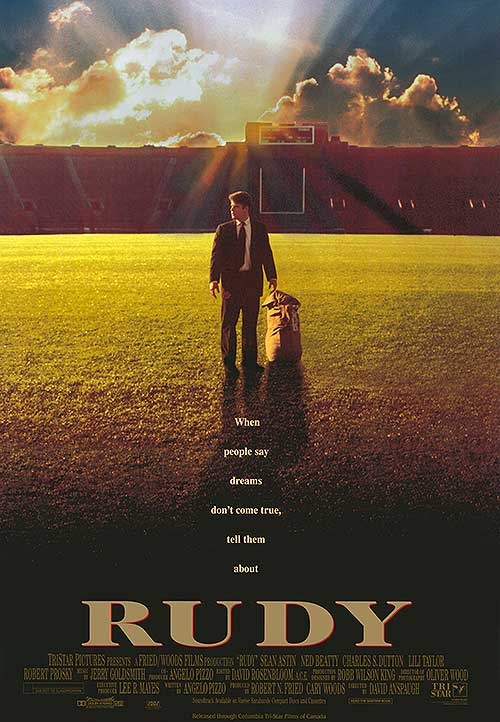 As it is the 25th anniversary since the original release of the movie “Rudy” in 1993, I figured it would be an excellent time to write a blog piece on the film. The great thing about this movie is that whether you are a football fan, or not, there is inspiration that can be gleaned from the film. Also, it doesn’t matter if you are a fan of Notre Dame football or not (although it helps to be a fan) for you to enjoy the storyline in the movie “Rudy.” The movie follows the story of Daniel “Rudy” Ruettiger, an undersized football player and less than gifted student who one day dreams of being accepted to the University of Notre Dame, and then walking on the football team there. Many obstacles stand in the way of both goals, including family discouragement, a less than enthusiastic response from one of Rudy’s high school teachers, and the fact that Rudy has much too small of a frame to play football at a top college football program like Notre Dame’s.

Regardless, Rudy stands to endure and follow his dreams to the end. Along the way, he meets friends and foes who either encourage him in the pursuit of his dreams, or those who attempt to halt the young man’s pursuit. This movie is a top-five movie for me, and upon seeing the film I believe that most would acknowledge that this is a film to be reckoned with. The scenes of Rudy’s pitfalls and triumphs, no doubt, will leave many emotional. The humor that is intertwined with the drama of the film also add to the appeal. Finally, the fact that the movie “Rudy” is based on a true story makes it even more of something that viewers can relate to. Overall, I give this movie 5 out of 5 stars, and highly recommend it. Remember, as the point is made in the movie, “In this life, you don’t have to prove nothin’ to nobody, but yourself.”