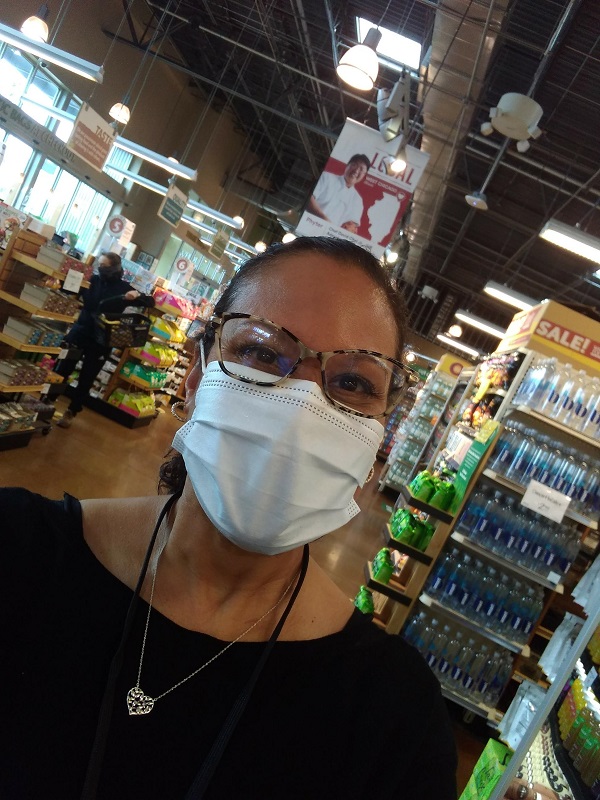 Desiree Peerman at her new job as a shopper filling grocery orders.

Desiree Peerman was one semester into her college education at Harper College when the pandemic hit and rocked her world. She was driving for a ride share company to have both a means of transportation and earn money. When the stay-at-home order went into effect, the number of rides she was getting dropped off a cliff. Without them, she could not meet her lease obligation, so she lost her car. Without a car, she had no income. She was terrified. She turned to food pantries and donating plasma to make ends meet. “I cried for two days. I was scared I would be homeless and saw no hope for continuing school and securing a better life for myself,” said Desiree.

It had been a long road to get to college in the first place. Desiree had once had a successful career in healthcare data research, moving up through the ranks from a research analyst to a senior consultant. Then she suffered a debilitating brain and spine injury that sidelined her for a decade. By the time she was able to rejoin the workforce, she realized that her high school degree was not enough to return to her old career or to pursue a new one. She needed a college degree. “The idea of going to college at the age of 53 was intimidating,” said Desiree. “I was worried about the other students treating me differently.” She had overcome that hurdle only to see the future she envisioned come crashing down around her.

Desiree’s world turned around when she confided in two people at Harper College: Heather Cobb, her Women’s Program advisor, and Chris Candelas her academic advisor. They connected her with Jen Rojek, a Harper College counselor, who provided the support Desiree needed. “She helped me calm down, and I was able to regain my composure. My hope and confidence were restored.” She also learned of the Harper Student Emergency Relief Fund that was providing students-in-need with up to $500 to cover short-term expenses.

“Receiving the emergency funds was just what I needed at the time,” said Desiree. “The gift of assistance from Harper began a streak of blessings for me.”

Desiree found a new job as a shopper at Whole Foods where she pulls items for customers’ online orders. A friend is letting her borrow a car to get to work. And her new work schedule will allow her to continue to take classes at Harper this summer. Desiree is working toward a certificate in software development. With the certificate, she plans to work in the tech industry while she pursues her bachelor’s degree in computer science at Northern Illinois University as part of Harper’s University Center.

“I cannot believe the goodness in my life,” added Desiree. “It is so heartwarming to learn that Harper, its employees and the community are behind the Emergency Fund. No wonder I can feel the caring, it is coming from real human hearts. It is not an exaggeration to say, my future was saved by Harper.”