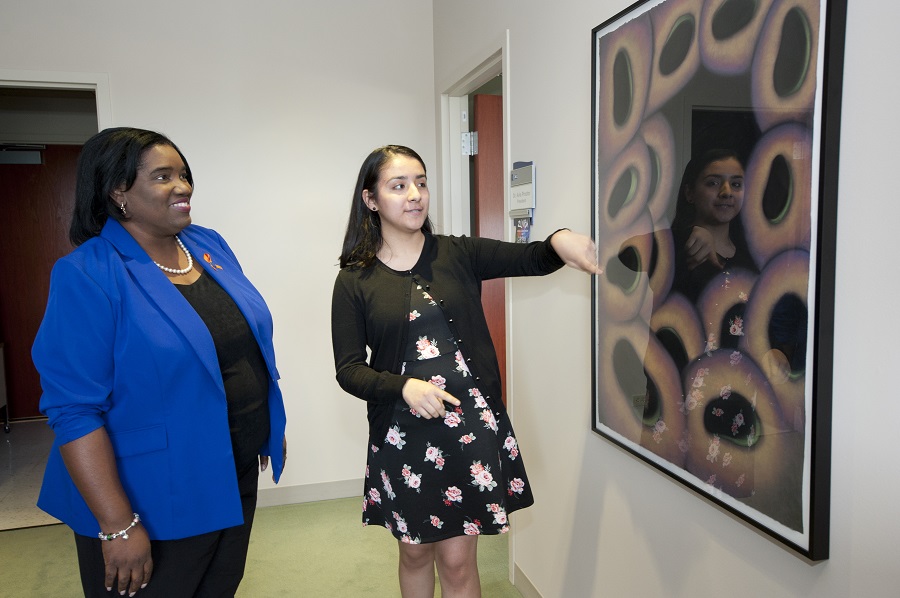 Dr. Proctor and Teresa Hernandez at the installation of the President's Art Selection

“Changing the context changes everything” is the premise of an art assignment Professor Perry Pollock gives to his Drawing II students. Teresa Hernandez, who was enrolled in the course last spring, took that idea to heart when she began developing her piece, “Again and Again.” When she submitted her final creation to the Spring 2019 Juried Student Exhibition, she never imagined it would be selected by Dr. Proctor for the President’s Art Selection award.

Teresa’s piece started with a simple line drawing of a caterpillar from a children’s coloring book. The first step in the assignment was to crop the image to the point where it loses all context and is no longer recognizable. Once the students have their cropped “source” image, Perry pushes them to use their imagination to introduce color, lighting and texture. “The cropping introduces mystery and disorientation. The student is forced to be inventive and has to fabricate a reality,” said Perry.

Teresa began to develop her piece by adding circles and pattern to make the image “weirder.” She then introduced color, but as she played with it, she kept hitting a wall. It wasn’t working the way she had planned. She struggled with the piece. She even put it onto her iPad so she could play with the colors. She still wasn’t feeling it, and the due date was looming. Finally, the day before the assignment was due, she completely committed herself to the piece, and after five hours of intense work, the piece came together. “I had to let go and let the art develop its own path. It ended up being better than I had originally imagined it.”

This is exactly what Perry is working to instill in his students. “Art students need to allow their work to lead them, to let it take on its own form. The artist needs to follow the process along with an open mind to a place of surprise and discovery.”

Teresa’s path of discovery is off to a great start. Having graduated from Wheeling High School in 2018, she is the youngest student to have been selected for the President’s Art Selection award. Teresa plans to continue developing as an artist with the goal of becoming an art history teacher. She is currently balancing her work schedule – 25 hours per week at TJ Maxx – with taking three classes each semester. “I have had to drop down to three classes per semester so I can pay for college, but I’ll get there.”

While this is the fifth year of this particular award, it was Dr. Proctor’s first year selecting a piece – which she had to do from photographs since she was not yet on campus during the Student Art Exhibition. “I really liked it when I saw it. I was drawn to the texture,” said Dr. Proctor. “I am proud to have this piece on display in the president’s office and really want to continue the practice of highlighting student work.”

The progression of “Again and Again.”

Visit the President’s Office to see the final piece.