Thank You for Believing in Me 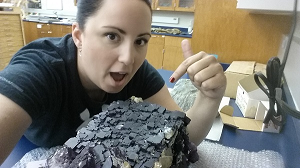 Because we all left in such a hurry in March, I never got a chance to say goodbye the way I wanted to, the way I planned.

I am sitting in front of the fire pit watching the flames in the cool night air, feeling a little nostalgic. Remember, Harper, when I showed up for the first day of classes, how scared I was? My stomach was in knots, and I was terrified to leave my car. Thoughts echoed phrases spoken to me over the years:

“You are too sick to go back to school.” (I was diagnosed with two chronic illnesses.)

“You won’t make it because you can’t do math.” (I have dyslexia and dyscalculia.)

“You are female.” (Apparently, some believe women can’t study science.)

Harper, that first day, I felt like you were speaking to me, too:

Over the years, you helped me delve into subjects I loved, like geology and noir fiction. I found new subjects that ignited my curiosity, like astronomy. I also found subjects that, shall we say, I will not pursue further, like physics.

We had some great times, didn’t we? The field trips to Starved Rock and Matthiessen State Parks where we slogged through mud almost a foot deep and water waist high just to glimpse the LaSalle Anticlinorium… I still laugh at the student who lost his shoes in the mud! While working as a Supplemental Instruction leader, I supported students from the beginning to the end. There were smiles, celebrations, laughs and some tears. The best part was that you showed me I could go back to school and succeed regardless of my age, medical conditions, disabilities or gender. It’s like you erased all those years of distorted beliefs and showed me a new life.

There were some dark times, though. Like when I had to work three jobs to help provide for my family. Or when I had a mini stroke. Or when I applied for graduate school to study paleobotany but was rejected because I was two courses short.

I thought I had wasted six years of my life chasing after a dream. I was in a deep sadness. I don’t remember who told me about geographic information systems, but as I looked at your website, all I remember thinking was, “I can’t do this!” I threw a Hail Mary pass and enrolled anyway.

The play paid off. I absolutely loved my classes, even the labs! How many students can say that? I had a knack for GIS, which could be applied to anything. I could combine my love of geology with my talent for GIS to build a career in hazards analysis and threat mitigation for emergency management. I took courses in emergency management and interned with the Palatine Emergency Management Agency where I learned how to apply my GIS skills to the needs of first responders. I found a graduate geography program with a specialization in GIS and a potential advisor for natural disasters and environmental risk. I spent weeks writing my statement of purpose with the help of Harper’s Writing Center. 23 versions later, I sent out my application to Northern Illinois University.

While driving home after working in the astronomy class on February 24, 2020, at 9:30 p.m., I got an email from the graduate school at NIU. The decision was made. 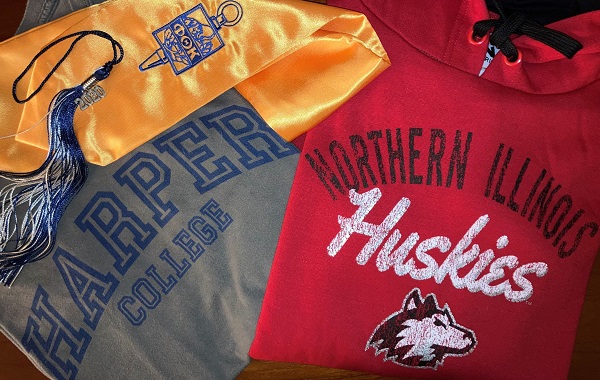 I thought I was going to throw up as I pulled into the Holiday Inn parking lot. I couldn’t wait until I got home to learn my fate. You probably heard me scream from Crystal Lake, followed by intense sobbing. After seven years of trying and failing and adapting and trying again, I could finally say that I was accepted as a graduate student in the department of Geographic and Atmospheric Sciences at NIU! I got a graduate assistantship, so my education is paid for and I don’t have to work three jobs. I was the first in my family to go to college and graduate with my bachelor’s degree. Now I am the first to go to graduate school.

I’m not going to lie, Harper, I’m nervous. I don’t know what to expect because I’m blazing a new trail. But I was nervous before and look how well that turned out. I guess this is my long-winded way of saying thank you for believing in me when I and others didn’t believe. One day, I hope I can repay the favor.

It’s getting late. The fire is dying out. Tomorrow’s a big day.  I just want to say, in the words of the Bob Hope, “Thanks for the memories.”

Jackie graduated in May 2020 with a certificate in Geographic Information Systems.