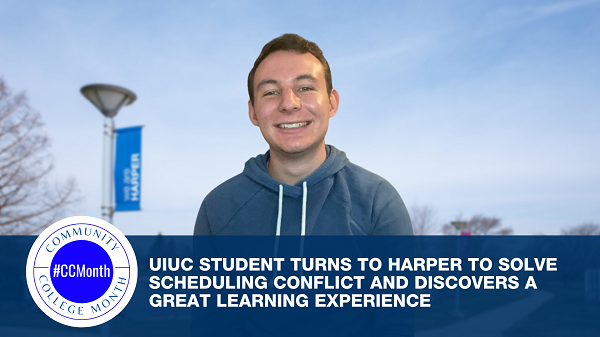 Raeghan Graessle, assistant professor, noticed something unusual about her student roster in her spring General Physics III Thermal and Quantum Physics (PHY 203) – eight students from the University of Illinois at Urbana-Champaign were enrolled in this one class. Traditionally, Harper enrolls a number of 4-year college and university students during the summer, but this doesn’t often happen on this scale during the spring semester. The pandemic-induced switch to online instruction impacted college students across the country and opened the opportunity to take classes virtually anywhere.

Max Mauschbaugh, a 19-year-old sophomore at UIUC, took advantage of the remote learning environment to take his physics class at Harper this spring. Max, who is from Peoria, is living in an apartment in Champaign (he had a lease he couldn’t get out of) while taking two UIUC classes, both of which are offered online synchronously. He wanted to take a third class, physics, but it conflicted with another course. He needed the physics course for his major. If he didn’t take the class now, he would have to take it over the summer, which would have slowed his progression to becoming a computer engineer. Max started looking around for options. A friend in the same scheduling predicament, who happened to be from Palatine, suggested Harper. After checking with his counselor to confirm the course would transfer, Max enrolled.

“My Harper course is a lot more interactive than my UIUC courses,” said Max. “At UIUC, there are 200 to 300 people in a class, the classes are less personable, and I don’t really talk with the professor. I have already emailed and talked with my Harper professor. She frequently checks in with us to ask us how we are doing. I feel a lot closer to her than my professors at UIUC.”

When Raeghan realized how many students were from UIUC, she decided to do 10-minute conferences with each student the first week of class. “I really wanted them to know how available and willing we are to help at Harper,” said Raeghan. “One of my UIUC students said he’d never even seen the face of an asynchronous professor before my Webex with him. That made me so sad. I don’t like to think of my students as little physics machines or that I’m a professor machine. We are all people with souls, and we’re all important. So, I met with everybody to reinforce that idea.” Raeghan found an unexpected and positive outcome of establishing a relationship with her students early in the semester - it laid a foundation for the open conversations with her students. “When students write me messages either by email, on Webex or through the Remind app, they are very conversational. It shows me they feel valued as humans. It’s very important because physics is a place you learn how to fail before you learn how to succeed. Being comfortable to fail is critical for learning.” 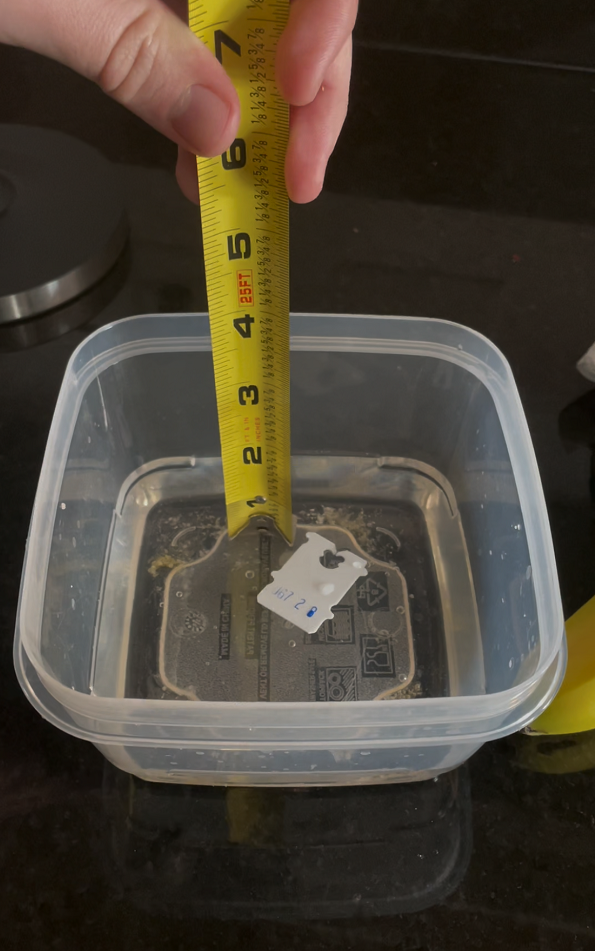 Max’s homemade miniature wave pond that he created to measure the amplitude of the waves, the length of the wave and the speed of those waves. Max’s goal was to put all of this information together into a master wave equation that will serve as a model for his waves for his physics portfolio 2 assessment.

Max also likes that his Harper class is more project-based than his UIUC classes, and the class does not rely so heavily on his performance on the final exam. “I am impressed with how creative my professor is with our projects. She has designed the labs to use common items we might have around the house, such as creating a pendulum using a bag of salt and hanging it from a ceiling fan.”

Necessity breeds creativity. Going into the semester, Raeghan created lab kits that her students picked up at the beginning of the semester. When she discovered that a number of students were not local and could not swing by Harper to pick up the materials, she had to redesign her labs to use common household objects. To help students grasp concepts, Raeghan records videos using a homemade lightboard. Max appreciates the pre-recorded videos, often watching them in advance of the lesson. “My Harper class is so well organized,” noted Max. “The whole class is planned out. I have enjoyed the smaller, more personalized experience.”

While in high school, Max earned 20 of his general education credits through Illinois Central College. He is currently taking 18 credit hours while holding down a part-time cybersecurity internship at Caterpillar. He is a man with a plan that he didn’t let get derailed by a scheduling conflict – he is very happy he discovered Harper and would definitely recommend it!