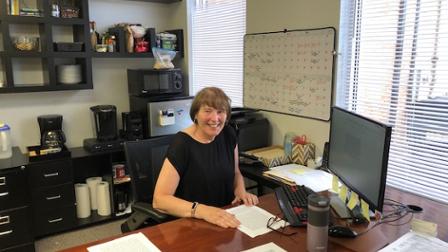 “I just got to the point where teaching wasn’t doing it for me. I’d hit a brick wall. It was time to do something else.”

Finding that “something else” at first proved elusive.

“I thought I had no marketable skills. I could speak Spanish, but that was not enough,” she said.

Janet applied for retail and office positions with no success. She considered earning a health care credential, “But I’ve always been more interested in language than science.”

Finally, Janet found her experience and interests were a fit with Harper College’s Paralegal Studies program. But she had a perception that she might be too old to return to college.

"I was sure I’d be the only older person in class,” she said. “When I attended my first class, which was in contract law, I discovered I wasn’t the only over-40-year-old student in the classroom.”

As students shared their stories during that class, Janet also learned that there were two students who had master’s degrees like she did. Many were also career changers.

“I knew then that I wasn’t in this alone.” In fact, Janet stayed in touch with some of those students in that first class throughout her program and even after graduation.

As part of her program, Janet served an internship with the Law Offices of Constance Doyle in Palatine, a firm that specializes in immigration, family and criminal law. After her internship, she went on to be hired by the firm.

“My internship was the best experience. I learned so much. Every student should serve an internship as part of their education.”

Working in an office that specializes in immigration law allows Janet to use her background in Spanish. Working in the legal field also aligns with her interests in writing and her attention to detail.

“As it turns out, I did have marketable skills,” she said.

Janet points to Harper’s paralegal program’s American Bar Association (ABA)–approval as an endorsement of quality and for the credibility it lends the program. “I would not enroll in a paralegal program that was not ABA-approved,” she added.

To adult learners who may be at their own career crossroads, Janet offered this advice:

“I look back now, and if I had started twenty years ago, I’d be an immigration lawyer today,” she said.