Skip to content
Get the latest updates on Harper's response to the COVID-19 outbreak.
Register now for Fall Semester courses
Learn about the new Online Associate in Arts degree. 100% online. 100% transfer.
https://www.harpercollege.edu/stories/images/Sergio%20Sosa%20web.jpg

Nothing Is Going to Stop Sergio 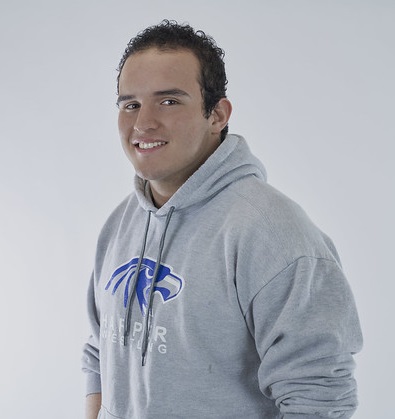 Sergio Sosa was living with his grandparents in El Salvador until his mother was finally able to have him join her in the United States. He was 15 years old and did not speak English.

He started his freshman year of high school in ESL classes. “I wasn’t a great student at the beginning of high school, but by senior year I was able to bring up my GPA to a 2.9.” When he graduated from high school, he knew he wanted to go on to college, but he also understood that he wasn’t yet in the right frame of mind. While his friends went away for the “college experience,” Sergio took a gap year to work. It was the best choice he could have made. “I would visit my friends at college and see that they spent most of their time partying. I knew I needed to prepare mentally – get my head straight – if I were going to start college strong.” Sergio spent a year working in a factory then dipped his toe in the college experience by taking a psychology course at Harper the following summer. “Now it felt right.”

And right it was. Sergio got straight A's in his first semester. He was a full-time student, working part-time and an athlete, wrestling for Coach Dan Loprieno. “Here at Harper, every teacher cares about the students. I learned something from every one of them – Roger House, Nellie Khalil – all of them.” In his second semester he was invited to join the Honors program and PTK. He continued to get A's, even in his honors classes, and discovered a passion for chemistry – organic chemistry, no less. “That year off did it for me. If I had gone to college right after high school, I wouldn’t have made it.”

Now that he had made it, the last thing he wanted to do was stop. He had his sights set on his bachelor’s degree and then medical school. But his mom and stepdad were struggling to pay the bills. They told Sergio he was going to have to take his next (and last) semester off. “I was in a panic. I reached out to the Foundation and, thankfully I qualified for scholarships that would cover nearly all of my semester’s tuition, the Amersham Endowment Scholarship and the Drs. Robert H. and C. Jayne Wilcox Otter Chemistry Endowed Scholarship.”

Sergio’s dream is to be a medical doctor. His mother had been pursuing a medical degree in El Salvador but dropped out of college to take care of her family. A divorced mother of two, she moved to the United States hoping to provide a better life for her sons. She took whatever job she could - working at restaurants and cleaning homes - to create a better life for her family. “My mom gave up everything for us,” said Sergio. “Finishing my education and becoming a doctor is my way of saying ‘thank you’ to my mom.”

Sergio finished his associate degree, rather spectacularly. He graduated in May with a perfect 4.0 GPA, wrestled in the national tournament, volunteered at a medical clinic, received the Excellence in Discipline award for Biology and was awarded a full tuition scholarship to Lake Forest College. “Nothing’s going to stop me,” said Sergio, “I have a picture in my head of me helping people.”