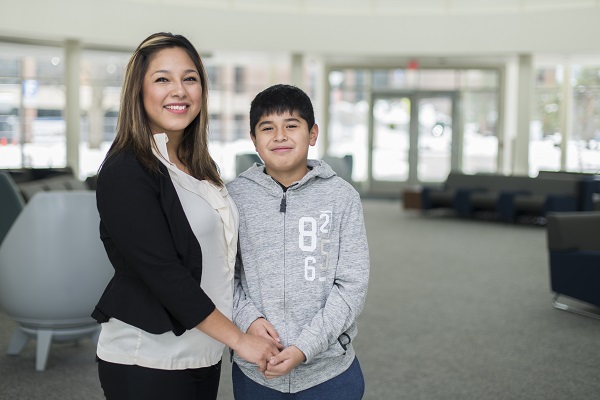 “Remember, Mom, when you used to work two jobs? Remember how you had to work on Christmas, New Year’s Day and all the other holidays?”

Zaira Ponce and her 12-year-old son talk about how their life used to be and picture how different their future looks now that she is getting her associate degree. It is a future where she is a social worker, helping others, and working in a job that includes benefits. A future where she and her son can spend time together. A future she never imagined possible, but one that is now getting closer and closer because people at Harper believed in her.

Zaira dropped out of high school at the age of 15. She was a single mom working two jobs as a waitress without health benefits, sick time or vacation. She couldn’t afford to miss work because that would mean a day without pay.

She had attempted to get her high school equivalency (HSE) several times, but something always got in the way. She started to believe that school wasn’t for her, and then she met Devin Chambers, AED/CTP Student Development Specialist. He believed in her. He became her cheerleader.

“Whenever things got hard and I wanted to quit, Devin would present other ways. He would say, ‘Take one class instead of two, but keep going,’” said Zaira. If Zaira had a big test that she was anxious about, Devin would Facebook her a good luck message. He would then follow up later in the day to ask her how it went. When Zaira was nearing the end of her HSE program, Devin encouraged her to pursue her associate degree and suggested she apply for a Foundation scholarship. “I didn’t know how to apply for scholarships or access services. Devin helped me figure it out,” Zaira explained. Because the Foundation believed in Zaira and awarded her the Geraldine Cosby Endowed Government Service scholarship, she has been able to cut back to one job and focus on her education and her son.

Zaira is currently enrolled in the Human Services program at Harper and credits Devin and Valerie Walker, Assistant Professor, with helping her understand the value of education. “My family expected me to get married, have children and work. They viewed education as wasting time that I could be spending making money,” noted Zaira. At Harper, Zaira is seeing another path. She says that professors like Valerie are always presenting students with ways to further their education and explaining what they need to pursue their careers. Because of Valerie, Zaira has spoken at conferences and interned at a local social service agency. “In my experience, there are a lot of people at Harper who really care. The president, Kenya Ayers, Juanita Bassler and all the teachers and staff. They are not pretending,” effused Zaira. “And they are always telling me to keep going.” Zaira is now looking ahead and planning to enroll in a 3 + 1 program where she will complete her bachelor’s at National Louis University. “I am so thankful to all the mentors in my life who have helped shape my future in a different way”

Today, Zaira views education differently. It is not a waste of time, and it is achievable. She counsels her sister, a sophomore in high school, about the types of classes she should take and to see college in her future. Her family is seeing her accomplish her goals, and they are starting to change their attitude toward education. Most importantly, her son now believes that education is valuable, talks about going to college and says he feels blessed that someone believed in their dream… and that makes her incredibly proud.

In Zaira’s words, “Dream big, work hard. It is possible.”