Ryan Helsdingen remembers being on the cusp of sending in his official commitment to the University of Illinois at Urbana-Champaign when he came across a Daily Herald article about Harper College’s new Engineering Pathways program. 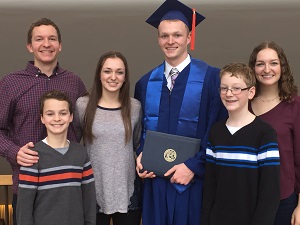 The innovative program, he learned, would provide Harper students with an opportunity to gain guaranteed admission to the College of Engineering at U. of I. – one of the nation’s top engineering programs – while saving more than $50,000 in the process.

“I’m the oldest of six kids. That’s a lot of people for my parents to get through college,” said Helsdingen, who soon after was selected for Pathways’ first cohort of students. “I wanted to go away to school, but I just couldn’t get past how much money I’d be saving.”

Less than five years later, Helsdingen, now 22, is working full time as an electrical engineer at Syska Hennessey’s downtown Chicago office, focused on design work for technical facilities. He had no difficulty landing a job after graduating from U. of I. in December with a bachelor’s degree in electrical engineering.

The Fremd High School alum admits coming to Harper was a financially motivated decision; however, he quickly developed an appreciation for his new school.

Helsdingen said he benefited from the small class sizes, quality of instruction and high level of engagement with professors. His Pathways classmates became close-knit, and they keep in touch to this day.

Most importantly, he felt completely prepared upon transferring his junior year to Champaign-Urbana.

“Dr. (Deborah) Damcott and my other professors really want you to succeed,” he said. “They’re always there for you. I have no doubt Harper did just as good a job as U. of I. would have the first two years, if not better.”

Helsdingen’s ultimate endorsement of Harper’s engineering program and Pathways came when he encouraged his younger brother, Connor, to follow in his footsteps. Connor is now a Pathways alum and junior down at U. of I. Younger sister Kayla also attends Harper and is considering the nursing field.

“The Pathways program and Harper in general have been a game-changer for our family,” said father Tom Helsdingen. “It’s funny, having six kids, you never really save enough for college no matter how hard you work toward that end. It’s just incredible to see the positive impact Harper has had on them. All six kids will be attending. It’s really a no-brainer.”

Ryan Helsdingen and his dad both will take part in this Saturday’s Explore Engineering event for high school students and their parents. If given the opportunity, Helsdingen plans to give a bit of advice to anyone still on the fence about their college plans.

“I want to tell people not to feel pressured to jump into that four-year institution,” Helsdingen said. “There’s sometimes a stigma about not going away to school, but I’m amazed at how many kids end up coming home after a semester because they’re not ready. I look at my situation and I’m just so glad I came to Harper. I feel like I’m ahead of the game now.”

To learn more about studying engineering at Harper, RSVP now for the Engineering Information Session on January 30.