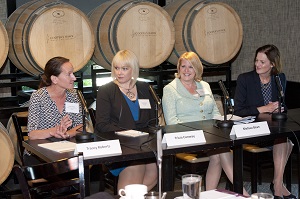 Since the early 1980s, women have steadily advanced, earning half of college degrees and entering more fields previously dominated by men. Despite these gains, the percentage of women at the top of corporate America has barely budged over the past decade.

At S&P 500 companies, women currently hold 6 percent of CEO positions, 20 percent of board seats and 25 percent of senior executive and management positions. In government, 19 percent of Congress is female, while the number of women governors stands at just five.

Yet, studies show diversity at the top positively correlates with better organizational performance. So, why are more women not in senior leadership roles?

The Harper College Educational Foundation’s HOPE Giving Circle recently held an event, “Women at the Table,” to explore the issue. 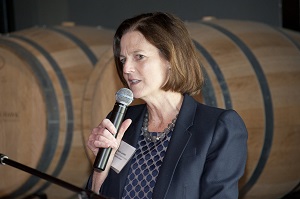 Lambert, who has overseen the 176-bed Magnet hospital and level II trauma center since 2001, reflected on her overwhelmingly positive experience as a woman in health care. Six of the 11 Advocate system hospitals are run by women. However, she acknowledges that while women make up 75 percent of the health care workforce, less than 30 percent of hospital CEOs and board members are women.

Of having women at all levels of an organization, Lambert says, “We know it’s the right thing. We know it changes the conversation at the table. There are different opportunities to grow as an organization. We also know it’s good for the bottom line.”

The panelists shared their stories and offered advice to the more than 70 men and women in attendance at Cooper’s Hawk Winery and Restaurant in Arlington Heights.

Bean discussed how, as a Northern newcomer in Congress, she built alliances with the largely Southern “Blue Dogs.” She also emphasized the importance of working behind the scenes.

"A lot of times to get your ideas at the table, you do the work before everyone even convenes,” she said. “If you think you’re going to share your idea at the board meeting, you’re already too late.”

Other pieces of advice included:

Harper’s HOPE Giving Circle brings together influential women with a common goal of supporting women to pursue higher education and reach their full potential. The program provides financial support, ongoing mentoring and leadership development for female students who are completing their final year at Harper and continuing on to a four-year college.

In July, the group will award two $10,000 scholarships. Student Kayla Karbowski, who will graduate later this month and transfer to Illinois State University, was the HOPE Giving Circle's first recipient.