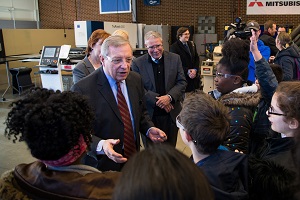 In 2012, U.S. Senator Dick Durbin was instrumental in securing a $12.9 million Department of Labor grant to expand Harper College’s advanced manufacturing training program to other community colleges throughout Illinois.

Today, the veteran lawmaker got to see some of the grant’s long-lasting impact first-hand.

“Our goal was to set up a manufacturing curriculum not just at Harper but one that could be taken to other community colleges and high schools in the area,” Durbin said. “Today we saw the actual work being done, the students learning critical skills and getting comfortable with levels of manufacturing. Harper in not only a leader in our state but beyond.”

Harper led the federal grant and worked with 20 other community colleges to form the Illinois Network for Advanced Manufacturing and create educational plans that provide a clear pathway to industry-recognized credentials in advanced manufacturing. With its share of the funding, Harper acquired its first two CNC machines, which now support a robust CNC precision machining specialization in the manufacturing technology program, as well as a CNC apprenticeship program and a dedicated CNC lab. 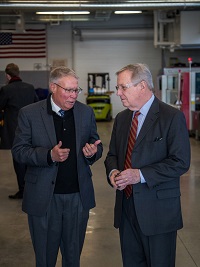 Harper also built on its own model of working in close partnership with regional manufacturers to help employers fill critical job shortages at growing businesses. The Fabricators and Manufacturers Association, for example, donated $500,000 toward the construction of the college’s 6,000 square-foot FMA Metal Fabrication Lab, doubling the size of Harper’s manufacturing facilities. FMA’s member companies have loaned equipment to the lab valued at nearly $1 million. Harper also works closely with Rolling Meadows-based Northrop Grumman, where students are hired as interns working in mechanics, machining and electronics. Many have been hired full-time after completing their internship.

In addition to touring Harper’s advanced manufacturing and HVAC labs, Senator Durbin met with Dr. Ken Ender, Harper College President, and State Sen. Ann Gillespie of the 27th District to discuss a variety of higher education topics including Harper’s Promise Scholarship Program, the region’s demographic changes, and the significant strides Harper has made in partnership with area high school districts to increase the number of students taking dual credit and decrease the number of students who need developmental education upon graduating.