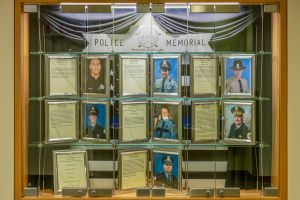 A new police memorial at Harper College will honor those who have lost their lives while serving and protecting the public.

A display case near the Law Enforcement and Justice Administration program in the Career and Technical Education Center, Building H, was formally dedicated on Friday.

“Students need to acknowledge the commitment to this career and know what it takes,” said Associate Professor Wayne Johnson, who served on the Chicago Police Department for 25 years. “This pays homage to those who serve every day and have paid the ultimate sacrifice.”

The display features the photographs and backgrounds of seven fallen officers from the region who had connections through Johnson and members of the Harper police and faculty. They are:

Johnson said the effort was a multi-program collaboration, with Graphic Arts, Fashion Design and Advanced Manufacturing helping with the design and installation of the display.