Skip to content
Get the latest updates on Harper's response to the COVID-19 outbreak.
Register now for Fall Semester courses
Learn about the new Online Associate in Arts degree. 100% online. 100% transfer.
https://www.harpercollege.edu/stories/images/kohring-ethan.jpg

Ethan Kohring Has a Passion for Music 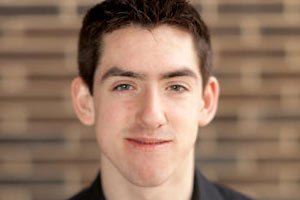 With twin brothers already in college, Ethan had a leg up on college planning. His brothers had come to Harper and then successfully transferred to Southern Illinois University Carbondale. Since he would be paying for college himself, he knew Harper presented the most affordable path to a degree. What he didn’t realize was the full range of opportunities Harper offered, including being one of a handful of community colleges accredited by the National Association of Schools of Music.

Ethan has a passion for music. He participated in his high school choir and has been working at The Music Room in downtown Palatine for four years, repairing fretted instruments and teaching voice, piano and ukulele. He came to Harper with a plan to take his core classes with an eye toward becoming a high school choir director. He discovered a group of passionate instructors who challenged him – from his Ethics class with Brian Brown to Music Theory with Dr. Barbara Bowker and Voice with Susan Lundholm. “I have learned so much from all my teachers. Not only do they push me to be better, as a student and a musician, but they are role models,” said Ethan. “I see qualities in my professors that I apply to my own teaching.”

As a singer, Ethan participates in Harper’s choral ensembles, Concert Choir and Spectra. But when he realized that there was a gap in the performance opportunities for students, he started another ensemble, Harper A Cappella. Working with Dr. Thomas Stauch, Ethan learned how to establish a new group on campus, recruit and audition students, coordinate schedules and rehearsals, reserve space, select music and arrange performances.

Ethan is now preparing to transfer to Millikin University, which he chose because of its smaller size. “Harper spoils you. You have direct access to professors. I am able to walk in and ask them questions, and I want to have this same one-on-one experience when I go on,” noted Ethan. “Harper has been fantastic, better than I ever expected.”